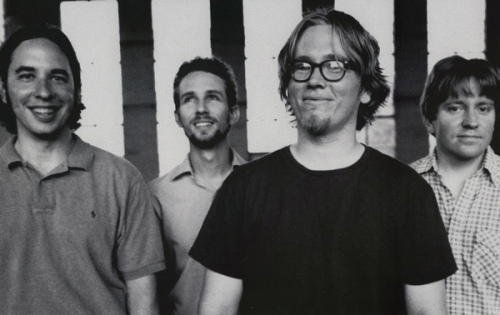 WHEN WE LOOK BACK NOW…

Not a lot of bands have kept their original lineup intact over the course of eleven records and nearly two decades. When Centro-matic started, I didn’t have many expectations other than putting out Redo The Stacks, and maybe getting the band together to play some shows when schedules allowed. There was never a formal asking of anyone to be in the band or make it their full time dance partner. We just did what was natural and enjoyable for us. We kept finding reasons to play shows, make records, then play more shows, then make more records. As time’s gone, I’ve hoped that Centro-matic’s history together has had something to do with a specific feeling when we play. I’ve hoped our collective connection over the years could somehow be heard through the the songs and the sounds. Whether that’s the case or not, I’ve always felt proud of our particular kind of racket.

Some pretty crucial forces have kept the four of us together for all this time. We’ve largely been fueled by a consistent drive to convene, share and create something new and inspiring to our ears each time out. Most of the time we’ve just had a good time hanging out. We’ve looked forward to it on just about every occasion I can remember and we’ve come to look after each other as family along the way. We’ve remained loyal to one another and I think that’s made us a better band, show by show, and tour by tour. In a lot of ways, we’ve become grown ups together.

We’ve encountered some successes I wouldn’t have imagined when we started, and like just about any band, we’ve run across some unforgettable setbacks. One thing we’ve fortunately avoided over the years is the presence of any notable drama. A couple of folks have even joked that the absence of drama in Centro-matic might contribute to the fact that our profile isn’t bigger; that a good deal of today’s consumer culture might feed off a little pot-stirring. Never been for us to say.

I can write with no hint of drama that our December tour will be the last Centro-matic tour for the indefinite and foreseeable future. For a handful of reasons, the time finally feels right to celebrate the existence of this thing, then let it rest. I do think that the four of us will embark on some musical endeavor together again, but can’t say that it will be within the realm or tone of what Centro-matic has done.

What I do feel certain about is that this tour should be a gathering of friends, old and new, in some venues that have been kind and loyal to us over the years. There’ll be some guests here and there to help us ring things out properly. I don’t think we ever wanted Centro-matic to leave the room silently, or sadly, or hobbled. This time feels as good a note as ever to go out on and I feel safe in saying that Mark, Matt, Scott and I would like for this tour and for these shows to be a celebration of our work and time together.

One thing that has resonated with us increasingly since the start is the devotion, love and generosity within our community of fans. We were never the most popular band on the block, but the kind of long-running support we’ve received has been something consistent and immeasurable. The climate of music has morphed into a pretty different thing since we started. Even as the times have changed around us, the connection with our fans has easily and always provided our biggest source of inspiration over this incredible journey.

It’s been the most important thing.

As always, maybe see you at the rock show.